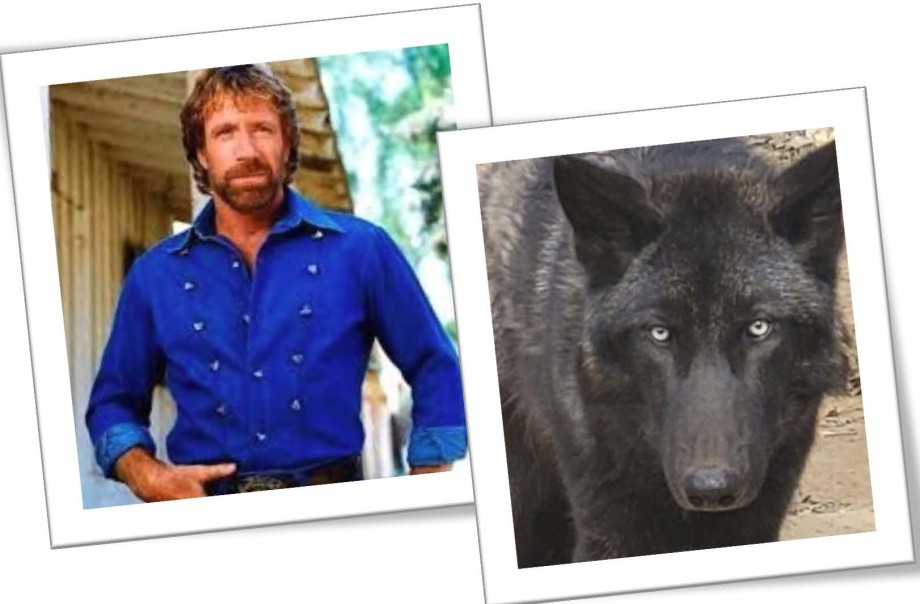 Everyone, meet McQuade , Chuck Norris’ namesake black phase grey wolf !  With that said, he wasn’t always in the eye of Chuck Norris, but he sure is now!  McQuade was initially bought for $2,000 by a family in Texas at 6 weeks old. After hearing about how good the husband’s previous “wolfdogs” were, the family decided to go online and buy another wolf as a pet.  McQuade was very lucky to go to a loving family, but the they learned fairly quickly how bad owning an actual wolf is in a short time, during which McQuade  caused thousands of dollars damages to the family’s house and property.

McQuade is a black phase grey wolf that exhibits wolf behavior consistently, including neophobia, which is the fear or dislike of anything new or unfamiliar, including humans!  With that said, he seems to be warming up to sanctuary living rather quickly.  He is our newest and youngest member of the pack, yet he is already proving that he won’t be the smallest at a current weight of 75lbs. at just 7 months old!

When McQuade first arrived at Saint Francis, we knew this special wolf needed a special name, and we also knew our relocation to Grimes County was coming up fast, and that McQuade would be the newest member of the pack at our new site.  That’s when we thought of Chuck Norris and his Lone Wolf Ranch just a little bit away from our new site…and an idea sparked!  The naming of this wolf was a new and exciting opportunity, not only for SFWS and our new arrival, but also for the Norris family!  After reaching out to the local actor, martial artist, and Texas icon (Chuck Norris), he and his wife Gena were delighted to name this guy, “McQuade” after Chuck’s starring role in the 1983 film “Lone Wolf McQuade!”