Mystery was the wolf who helped start Saint Francis Wolf Sanctuary back in 2002, and was the heart and soul of the sanctuary from our inception until her death in 2017 at the age of 18.

Mystery had a rough early life. She was born at an abusive and neglectful breeder in Arizona, and after the breeder was shut down, she and his other animals were taken to a sanctuary in Conroe, Texas. That sanctuary was very poorly run, and Mystery escaped almost immediately. Running around in the woods of Montgomery County, Mystery was caught in a steel trap, severely injuring her foot, and then shot, before finally being recaptured and taken to the vet. There she was fixed up, but forced to remain in a tiny concrete holding area because there was nowhere for her to go.

The vet knew our founder Jean LeFevre from her work with other animals, and suggested she apply for the proper licenses to care for wolves. Thus, SFWS was born. As you can see from Mystery’s “Before” and “After” pictures, if ever we made a difference, it was with Mystery! 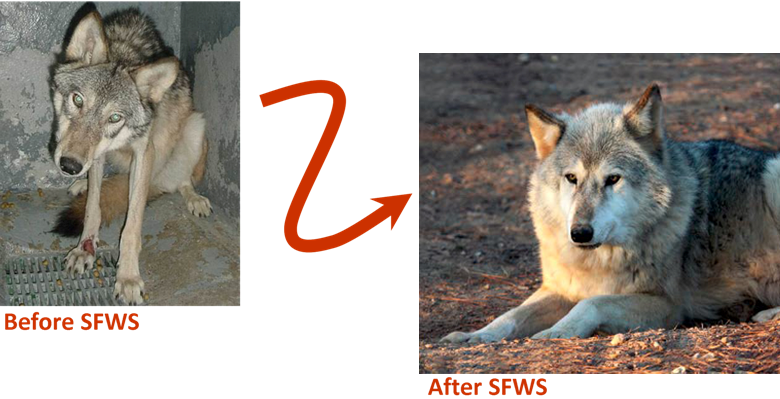 Mystery was truly one of a kind. Though she was born in captivity, and lived all her life (except for that one eventful week) behind bars, she had the spirit of a wild wolf. She was our boss and “Queen,” and would be very unhappy if anyone didn’t show proper respect to her authority! But she also taught us that “dominance” is not about physical strength or beating up those weaker than you; it’s about a calm, supreme, gentle confidence that instills instant respect. She never had to bully her companions,  Rose and Big Boy, they simply respected her because she had the gravitas of a leader. Mystery always began the evening howling sessions, and her beautiful song inspired all who met her.

Mystery never let anything stop her or keep her down, from her gunshot and trap injuries as a young wolf to Father Time as she aged. Only in her last few months, approaching her 18th birthday, did she begin to show any signs of slowing down. But time did catch up to her in the end, as it always must, and she passed away peacefully in April of 2017, with Rose and Big Boy by her side. They had faithfully ministered to her in her final illness, always making sure to stand guard over her and keep her company. Rose would actually nuzzle and lick Mystery each morning to make her get up for her medicine.

Mystery’s fiery passion and strength never diminished. She was the single strongest animal any of us have ever known. We are eternally grateful to her for the lessons she left us with, and for the privilege of knowing her.